During the making of a documentary on John Simons made in 2018, John started speaking of a group of well dressed ‘erberts’ as he put it, from the mid 1950s who were part of a scene that had been forgotten, or at least had been written out in favour of the modernist wave that followed a few years later.

Due to a lack of time and mainly money, the filmmakers never used that footage, but it was something John and myself (I produced the film) have discussed over a coffee many times since.

The people and the time they feature in mean a lot to John, and in many ways, they and others like them, are the reason he became who he became.

John is an infectious guy if you get him talking and I found the best thing to do is not interrupt him. So, just like the best jazz riffs, I let him go and held on tight. I haven’t dumbed any of this down so if you don’t recognise a name then please feel free to investigate further. It’s a little snapshot of a time, that I felt if not written down, would be one day lost to us.

So, grab yourself a single espresso and join us for a trip to discover a lost world. As John said as I turned on the tape recorder ‘If you want to talk about this subject, be ready for the charge of light brigade, because it will come right through!’

What I’m about to talk about is the 50s. There were a lot less people involved, and it was a cottage industry, communications were low, group expectations were low, BUT, if you were part of this Soho/West End/Chelsea underground, the beat generation was active and happening in London.

It might have permeated out into the suburbs later in the decade towards the 60s, but it definitely started in selected jazz clubs from 1952/53, so earlier than many now, might expect.

It is a crime to not know about this period.

The rich and the poor and the Debs (debutantes) all mixed. A couple of really cool guys were Brian and Eddie and they would be wearing their Levis jeans tucked into their riding boots. This is ‘53/’54.  There would be characters in their circle, who would be hiring flats in Dolphin Square and there they made parties.

Another face on the scene was trumpeter Buddy Bounds, who was a terrific trumpeter, who unfortunately had deformed arms, a thalidomide victim. He was very cool cat, a beatnik. He also managed to play the vibes as well. A lovely guy.

Its soundtrack was the newly found music importing from the USA, modern jazz from the likes of Charlie Parker & Dizzy Gillespie.

There was quite a big East coast jazz thing going on at Cissy’s rehearsal club on Archer Street, Soho. It was the first strip club as such and my mate Harvey’s mum, Cissy, owned it. Around 52/53 we’d go down there after school for a cup of tea. It was also a place that musicians met and practiced in between the shows.

Everyone would go there if they came here, all the big names did, Lena Horne etc.…

It was a strip club, but the girls were tableaux …you know what that is? They were naked but they didn’t dare move. I used think, and remember I was only 12/13,  ‘how come she’s got red blotches on her chest?’

Cissy, who was a big woman, was a real character, and she knew a lot of West Indian guys and she brought Joe Harriott over. Joe was a follower of Charlie Parker and he played a white acrylic alto. Imagine that?

Later the music went West coast, with Gerry Mulligan and Chet Baker and all that schtick came along a little more in the mid 1950s around the time the Stan Kenton band appeared at the Albert Hall was 1954.

For me the Lyceum would be the first Mod reflection I could give you. The little boxer Terry Spinks would mix with the ‘Up on the Roof’ singer Kenny Lynch. They stood in the ‘Mod Corner’ of the Lyceum around 1954. Kenny always wore a check Burberry overcoat. He WAS a really early ‘London Lad.’ He knew everything that was going on.

I always noticed the South London guys were always very smart, well dressed ‘Jack the Lads.’ They used to wear KD’s, which were chinos, with the KD meaning ‘compulsory drill’ and they would wear a navy Fred Perry with it, which is quite a sharp look even this afternoon…

Many a time I’d look across at someone and I get a look back as if to say ‘who you lookin’ at?’

I mean they were tasty guys and they would have murdered me. I’d quickly say ‘No, no I’m staring, I’m only admiring your clothes’ Haha.

Their hair would be a ‘Perry Como’ cut. There were some very good-looking guys about from South London. They knew how to dress.

I was like 14 you know.  However I was never stopped going in. They never said anything to me. Remember, I had all the gear on…

My uncle Max made me a grey double-breasted suit to go to the Lyceum in.

I used to see scooters parked up outside The Lyceum around ’55 or ’56. Not loads of them, just a few, but they were there.

The music was by the Oscar Rabin band. Big band jazz, dance music and I think Don Lang sat in?

There was a form of dancing in the Lyceum, which is now extinct. You would have seen that in all the youth clubs in London. In the early 1950s they were all good jivers, natural jivers. NOT taking lessons in jiving, they just could do it.

Footage of that sometimes comes up on the telly in black and white films, kids jiving away.

There were also a few aristocrats about, you know.  Well off guys, maybe studying at Art College. They had a French girlfriend you know. It was all happening out there.

You had Dandy Kim running around the West End. He had a beautiful American, car and had affairs with Hollywood actresses. He knew everybody…and their friend!

If I remember rightly I delivered a dressing gown to him at his apartment once, from Cecil Gee where I worked. And If I also remember rightly, he went to a casket and pulled out a white fiver and gave it to me. Good money then.

I think he came from fairly humble beginnings but created a ‘persona’. He was good looking, a bit like John Mills. All doors opened to him.

By the way, Cecil Gee brought over a tailor from Rome called Giorgio who ended with a little shop in an arcade here.

He was brought over here in 1955/56 and he was like a peasant really. But in the end he had some very successful years and sent his kids to private schools. He made me a couple of lovely suits. The Italian look was big.

And don’t forget we had loads of Italian waiters in Soho. There was one place they would get there lunch and stand outside with their pasta eating it out of a bowl. Those guys were very sharp.

The first week I worked at Cecil Gee, I found this old English menswear shop around the corner and I had a white poplin pop over shirt made there. This would be 1955.

I was looking at the American clothes from the age of 12. My uncles would go to the States and bring back magazines and I studied the clothes within them.

I went to David’s in Charing Cross Road where they sold Lion of Troy shirts, Hickocks belts and gawd knows what else.

And I would sit in the coffee bar attached to the shop at Cecil Gee watching the world go by, soaking it all up.

A lot of the communications about what was going on would be picked up from around Soho. From in the jazz clubs really.

At this time I was studying the distributive trades course at St Martins School of Art and I even gave a few saxophone lessons. I never became a great player, but in the basement there I taught a few, one of who became a professional, George Carne…he won’t remember me though. He became a very good player.

Don’t forget this period is described to us and in many books, as a dull period, so grey and boring.

The Toffs….the toffs and bottoms!’ 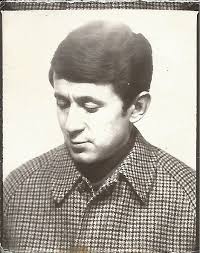