I will never forget it. I was in the tearoom of 85 Fleet Street, minding my own, when a bloke I used to work with suddenly shouted my way…

‘ere Bax, just walked past The Guildhall and there is a geezer in the courtyard bashing the shit out of a drum kit. Apparently, he was rehearsing for some  lunchtime jazz or something. Thought of you, cos I know you like all that cobblers…’

By the time he had got to the end of the word cobblers, I was already hot footing it down towards the historic building, he had just mentioned. I should explain that around the time in question here, let’s say the mid 1980s, I was really into jazz, having lost my mind on Blue Note and the like. I loved the look, the sound and the lifestyle that surrounded that world, and I was reading as many books on the subject as I could and attending as many gigs as I could get to.

When I finally got to The Guildhall, I was delighted to find that the ‘geezer’ and drummer in question was Tommy Chase, who was indeed bashing the granny out of his vintage Premier kit. He was also baffling the life out of the passing office workers with his version of straight-ahead, hard bop jazz, but you could just tell he paid them no mind.  As I recall, it was a boiling hot day and as was my way back then, I was carrying an Olympus Trip camera, with which I managed to get a shot of Tommy, which is in among the photos that accompanies this piece.

The man himself was a Mancunian and a baby boomer, born in 1947. It appears he was a very bright kid, but like many of that ‘eleven plus generation’ failed to shine academically come exam time. Mind you, I get the feeling Tommy was never going to worry about that unduly and turned to music quickly upon leaving school. He was mainly self-taught on the drums, turning professional at an early age and working the Northern club circuit, before moving on to cruise liners, earning while learning.

He finally settled in London 1973, performing at the ‘Little Theatre Club’ off of St Martins Lane, which had a capacity of just 50 and  was home to the ‘free’ jazz scene in the UK, run by John Stevens.

Looking back at old videos of Tommy in action for this piece, one word kept coming to my mind. Uncompromising. His drumming style is always name checked as being from the ‘School of Art Blakey’ – straight ahead and hard and tough. Tommy it seems would have agreed.

‘Art Blakey is a very interesting drummer, a colourful drummer, with his knocking and his tapping. Max Roach, Elvin Jones, Louis Hayes,  That’s the kind of thing I was interested in.’

Tommy’s musical profile grew and that timed perfectly with a renewed interest in modern jazz by the mid/late ‘80s. His side men were usually selected from the young crop of jazzers, then coming through. Alan Barnes, Mark Edwards, Kevin Flanagan, NickWeldon, Andy Cleyndert and Dave Cliff can all be seen hanging on to the groove as Tommy exploded all over the tunes they were playing in his heyday.

On occasions the jazz dance team of IDJ shared Tommy’s stage, as well as the groove that Tommy and the band had laid down. Other names of note that were part of Tommy’s professional world, include Ray Warliegh, Harry Beckett, and Art Themen.

‘If your band has got something going and has got balls, it can stand up against a really good pop band… if it’s got energy . I play with young musicians because they go for it. You don’t find many 45-year-olds that are champions, instead you find young fighters who are coming up.’

Tommy had a reputation for arguing with everyone from band members, to venue promoters, to his punters. As I said earlier, uncompromising.

He was so into his own vibe, that he dictated the look of ‘his’ musicians from hair cut to the style of shoes they had to wear. He rehearsed the band hard and it is said they had to  wear a suit and ties whilst doing so .

‘The look of the quartet is very important. It imposes a togetherness on the musicians. I couldn’t climb on the band stand in a denim shirt, a pair of jeans and sneakers. Its just not my scene. You can’t have people outside telling you what to do. It’s like telling Van Gogh or Picasso, I don’t like that tree there, it’s getting in the way. You can’t have that it’s ridiculous. You can’t tell the artist what to do.

Everything I have ever done is centred around drums. I bought a detached bungalow so I could practice my drums when I wanted.‘

He  finally left the music scene in early 1999 after a gig at The Jazz Cafe in Camden  and retired to a quieter life, some say in London and some say back up North. Word had it, his hearing had started to fail, obviously devastating for a musician, and later he may have suffered with the effects of Dementia.

For a further insight into the man himself, I recently caught up with John ‘Bomber’ Wild who knew Tommy personally and he gave me a flavour of the man behind the drum kit.

‘My cousin had purchased a property in Acton, and we operated a carpet installation business from the premises. The front of the house was converted into 3 small flats. By the late ‘70s, I was running the carpet workshop at the back of the property. The flats were mainly full of back packing, party animal New Zealanders, but then one day a vacant flat was rented to a cocky ‘Jack the lad’ from Manchester. Tommy Chase had arrived.

Whilst carrying out my afternoon duties of cutting and sewing carpets, my peaceful existence was gradually being interrupted  by the sound of drumbeats. Our new resident was practising. I liked Tommy, short in staturebut he had a certain swag about him, the way he walked, the way he carried himself. The thing that always came to my attention was that Tommy was most definitely a Mod. In fact, probably the greatest example of mod–ness, the real deal, the complete package. A jazz modernist for sure.

It turned out he was an original 60s mod, who would tell me stories about going to The Twisted Wheel club in Manchester, his exploits on cruise liners and his adventures into the world of London Jazz. He was always well turned out  and rarely did I ever see him dressed in casual clobber, it was always suit and heavy overcoat. Hair cut short,  college style, and stinking of aftershave. And, proper shoes, right out of a scene of  New York’s Mad Men’s era.

He was certainly not backward in coming forward, telling me ‘I’m the fucking best drummer in the country.’

I never had a clue half the time what he was raving on about.

I was a jazz-funker and he was a Jazz purist in every way.
Tommy completely lived the jazz lifestyle to the full. When he wasn’t working, we’d often end up with a few of us in many an Acton boozer, on afternoon benders. At other times, he would have mood swings and at those times he was best avoided.

Tommy was regularly popping into my workshop for a coffee, a piss–take and sometimes a bit lost for company. One thing for sure though he lived for drumming and jazz.  He had a girlfriend, who was a bit of a hippy chick, who did her very best to look after him.

’Jazz bomber, you gotta get into jazz .’

I went along a few times to jazz nights around Barnes and Richmond to see him play. Wow,  what a powerful and totally focused drummer he was. By now,  he was actually practicing in our workshop at night and I really began to appreciate how talented Tom was . He also invited me to his residency at The Wag Club which was full of up-and-coming new jazz followers and some top dancers too.

Tom purchased a house in the same street, by Acton Town tube Station and things were picking up for him. He had a studio built there too. He still popped in every other day though, normally to  tell me of his most recent jazz nights. We lost contact about 1986, when I left the firm  and went self-employed. But Tom certainly left a lasting impression on me .

Always had that cocky Manchester way about him.

If he did go deaf that would have been devastating  and so cruel .

I had all his albums, and I have just purchased ‘Hard’ – the Ace compilation – again and am searching out the others.  ‘Killer Joe’ I still have the copy Tommy gave me….’

Thanks as ever to ‘Bomber’ for his insight. A man who knows ‘our’ culture, better than most. It is fair to say that Tommy is still a bit of a jazz hero to people of my generation who got into the lifestyle during that resurgence in modern  jazz of that era. The sight of Tommy, sitting behind his kit, his back ramrod straight and his head cocked back, attired in the right choice of clobber and with a non-compromising  fire in his belly, was one we all identified with, as much as the excitement he and his band generated.

Those that saw him however, have never forgotten him. 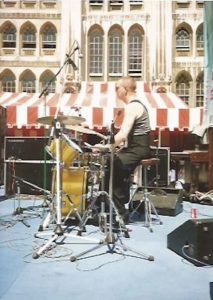 The Autumn / Winter 2021 collection is now available in our shop