I can’t honestly remember the exact year I stumbled across the door of Bar Italia in Soho’s Frith Street, but I like to think it was around the time I first read the book ‘Absolute Beginners ‘ by Colin MacInnes, so that would be the early to mid 80s I guess?

I mention the book, because it became my ‘life manual’ for a year or so back then and so I took up jazz and good clothes all the while spending as much time as possible in Soho. I seem to remember the door sometimes being closed then and it taking a bit of nerve to walk in, as it looked and sounded like a private Italian members club from the outside looking in.

I guess I was afforded a warm welcome however because I would always go back there when in the area and when I became self employed at the start of 2008, I began using it as my West End office really, arranging to meet people there, or simply sitting down over a cappuccino or three whilst writing up ideas for future projects.

The two ‘Barista’ I fondly recall behind the counter then were Luca and Dini. Together they were a very strong team and also funny if you got them in a good mood. Eventually by sitting there on a very regular basis, I got to know general manager Paola and Antonio who was the face of the owners in the daytime.

In time I would end up working for the family, but that is another story for another time.

For now in 2019, as the Bar celebrates 70 years at number 22 Frith – or Froth Street as some regulars call it – I thought I would look back at the history of this iconic piece of the naughty square mile that is Soho.

The first owners Lou and Caterina Polledri arrived in the UK from Piacenza, Italy. At first they opened a ‘spit and sawdust’ cafe on Long Acre for the traders in nearby Covent Garden fruit, veg and flower market.

There has been a large Italian community in and around Clerkenwell as well as Soho, since the late 19th century. Famous cafes and restaurants began life in Soho from the 1930s like Gennaro’s and Bianchi’s, which is now Little Italy next door to Bar Italia.

During the Second World War, due to the Italian fascist dictator Mussolini aligning himself to Hitler, Italians living here had it tough at a time when suspicion was everywhere.

Mobs attacked Italian establishments and Italian men between the ages of 16 and 60 were rounded up and interned on the Isle of Man, even though many were born here in the UK.  Many wives were left to tend to families and to also keep businesses afloat whilst the men were away.

Many of the interned were later deported to Canada and Australia. Tragically 471 Italian men lost their lives when a German submarine sank the ship they were on ‘The Andorra Star’ on its way to Canada.

Following the end of the war, the Italian community began to return to the catering trade. Lou and Caterina saw an opportunity to open in the heart of Soho, where they knew there was a thriving ‘Italian Quarter’. To secure the lease, the couple borrowed £50 from an ice man (remember there were not many fridges back then so ice was delivered daily) and soon after the Bar opened in 1949. It served great coffee, when even good coffee was hard to find, and this was eventually made from one of the first Gaggia coffee machines in the UK.

Very quickly, the Bar became a social centre in the days of only a few telephones, never mind the Internet. Messages were left at the Bar by families back in Italy advising of births, deaths and marriages. The scores of all important football matches could be discovered and jobs were found by word of mouth among the customers, when work was scarce for those of an Italian background. Waiters in between shifts would sit and tell stories of back home, in the one place that felt like home. 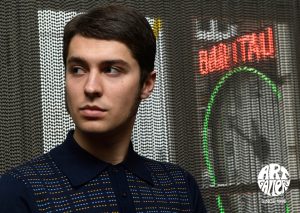 Style wise, the Bar Italia was state of the art upon opening and, very little of what you see today 70 years on has changed. The famous terrazzo floor, over which millions of pairs of feet have walked, was laid by the family’s Uncle Torino, and the distinctive Formica is the same more or less from when first installed. Sure, it has been remodelled a few times, after all 70 years is a very long time, but the family have been careful to not tinker too much with it.

Along with the neon clock and the blue plaque dedicated to John Logie Baird, who discovered television in a flat above the Bar in 1926, both situated on the front of the building, the most iconinc item on show has to to be the poster of one time world heavyweight boxing champion, Italian American Rocky Marciano, which hangs behind the counter.

Rocky was in London in the mid 1960s, and befriended Lou and Caternia’s son Nino, Antonio’s father. Rocky told Nino he was fed up of hotel food and longed for good old fashioned Italian home cooking. Nino took him to his Caterina’s house where she served up Risotto and Polenta and some home made wine. Rocky was content and slept for a few hours after.

When he sadly died in a plane accident in the Sumer of 1969, Rocky’s wife Barbara sent over the poster in the same year, as a token of friendship and a thank you to the Polledri family for looking after her husband on his visit. It has hung in the Bar ever since.

As mentioned earlier, football is a big part of the life of the Bar.

‘La Domenica Sportiva’ and all that.

As we all know, no other sporting occasion captures the public’s imagination like the football World Cup. Take for example, 1982. One old television and no air conditioning was not a good combination with a Bar packed to the rafters full of Italians shouting and willing their country on.

The humidity then killed the telly. The customers then wanted to kill Antonio, who was standing there in his white apron. Thinking life preservation, he very quickly borrowed a television from Bianchi’s next door.

Good job he did, as the Italian team went on to win the cup.  Pasta was then thrown out of the windows like confetti to celebrate with the large crowd below crowded in the street.

There was even a bigger crowd for the final again featuring Italy in 1994. So big in fact that it made the front page of the following days newspapers.

Along with football, the other sport loved by the Bar is cycling, with both the Giro d’Italia and The Tour De France shown live daily. Riders, Mark Cavendish, David Millar and Sir Bradley Wiggins are all regulars in the Bar, both as punters and friends of the family.

Famous faces from TV and film come and go in the Bar too, from   Francis Ford Coppola to Dustin Hoffman, Paul Weller to Martin Freeman, but the owner’s value their regulars, those who pop in for their daily fix of coffee before, during or after their days work or play.

I always say when Bar Italia closes, Soho will be finally finished. It is simply an institution. 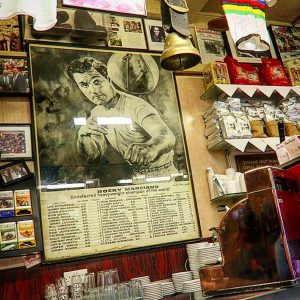