YEAR
YEAR
CLOSE
Art in the name of Mod

The name Paul ‘Smiler’ Anderson will need no introduction from me to the vast majority of people who read my weekly ramblings on the blessed Art Gallery Clothing website.

Smiler, as is he known to one and all, has been on the Mod scene for as long as he and anyone else can remember. From scooter riding punter to highly respected DJ and club promoter, he has been involved with it all. He has also written a book or two on the subject and one of them is the focus of my blog today.

I was on nodding terms with him for a few years here and there in ‘Modland’ but I think we first sat down and talked at length, when I ventured out to Reading to see his ‘Reading Steady Go’ exhibition at the Reading Museum in 2011.  Cilla Black opened that by the way, which pleased me more than Smiler I seem to recall.

Anyway, over a pint after he had kindly shown myself and my wife Lou round the expo, he mentioned he had been writing a book on the Mod scene for a few years, but had so far failed to secure a publisher.

He showed us the work he had put in on it, by way of a folder that contained many unseen photos and interviews with those who had been at the Mod coalface back at the start of it all. I was mightily impressed and frankly amazed that a publisher hadn’t bitten his arm off for it. He mentioned some kind souls had made introductions to editors and book companies, but he had had no takers.

Well, me being me, I offered to set up a fund with other like minds and try and get it printed, as I feared it would be lost otherwise and that would be tragedy, because it looked and read so well. The work in it couldn’t be denied

Thankfully however, a few months later the publisher Omnibus optioned the book and ‘Mods – The New Religion’ finally hit the shops in 2014.

Those who knew the real deal when they saw it immediately labelled it as the ‘Mod Bible.’  Even the Mod ‘Taliban’ took a day off.

The forensic level of research in the book left nobody in doubt that Smiler really knew his stuff and had set the standard by which all other ‘mod’ related books would be judged by.

Well, he has been at it again with his latest book ‘Mod Art’ and this has been available since February 2019. In the book Smiler concentrates on the ‘visuals’ in and around the world of Mod, from early magazine adverts, to gig and film posters, real ‘artwork’ itself, to record sleeves, from fanzines and flyers and to all the stops in between.

Unsurprisingly, visually it is a treat and once again, Smiler’s built up knowledge tells the story behind the images to paint a portrait of Mod that perhaps is not so well known to most.

Within the book, Smiler talks to the likes of king of UK pop art Peter Blake, and to those who ran and designed 60s TV shows and magazines. And to Paul Weller on his love and use of Mod and sixties items in his work over the years and to modern day artists working now, finding out how the past infuses the work that they are creating today.

‘Mod Art’ is a mighty tome of over 270 pages and it is very nicely designed. I found it a fascinating read as well as inspiring on a ‘pleasing to the eye’ level.

For me, it’s the perfect coffee table book to dip in and out of, with each visit to it, informative and educational.

Ok, hands up, he may be a mate and I might be currently writing a book with him, but I have honestly put that to one side in my appreciation of this fine work and it is one I heartily recommend.

Even if he does support that ‘other’ mob. 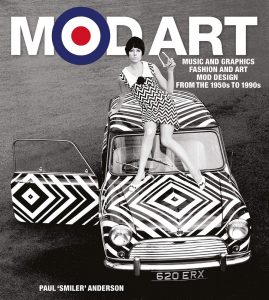