The bold, brash and overtly colourful boating blazer has long had its place in the history of mod. Never had one myself though. I always thought you had to have a small tugboat to pull the look off. Fair to say it looked good on some, but not on all…

Savile Row called them boating coats or rowing blazer’s, which gives you a head start on the origin of the garment, for it was crews of upper class rowers that first sported them in their boat clubs up and down the university’s of this land of ours. They date back to 1825 when the chaps of Lady Margaret Boat Club, the rowing team for St Johns College Cambridge, sported team colours of bright red blazers. Traditionally there were made of a heavy flannel material, ideal for keeping out a chill on an early morning training row. They were cut in a subtle way allowing for ease of movement for those rowing, whilst wearing one.

The ‘look’ then kicked on from there, with all manner of colours and stripes incorporated into a multitude of designs, denoting your club/team or regiment in the hues, that could be easily identified. The plain old navy coloured blazer also had a part to play in this too, with it being introduced for those more toned down social events.

The actual term ‘blazer’ is said to come from the good ship HMS Blazer where the crew were dressed in blue and white striped jackets that were associated with the ships name and gradually the word was incorporated into our everyday language.

The look also became popular ‘across the pond’ among the Ivy League schools of the US of A.

The blazer continually developed with club crests being added to breast pockets and gleaming brass regimental or crested buttons also becoming popular. Colours got louder and louder, culminating in a garish, narcissistic ‘look at me’ effect. Mods were taking notes methinks…

The sporting connections of the blazer gradually mutated onto cricket pitches around the UK and indeed the Commonwealth, as well as at Wimbledon (tennis not dog track), mainly when the game was strictly amateur before going professional in 1968. It also made an appearance on a golf course in Augusta, where the wearing of a green jacket by members has been in existence since 1937. Indeed, each year, the winner of ‘The Masters’ tournament played on the course, receives a similar green jacket as made by Henry Poole of Savile Row.

From Teddy Boys to Two Tone, the boating blazer is another classic case of – ‘modify and adapt’ – something that the street kids of the UK, especially of the 50s to the 80s, were very good at. They took a heritage style and then twisted it all out of shape, far enough away from its origins to then make it their own.

Of course, among all that, the look of Ivy League has always been accepted as a major influence on the early mod styling and perhaps that has a part to play in the introduction of the boating blazer to the wardrobes of the youth of the UK.

Whatever the origin, single-breasted versions gradually began appearing on the racks on of boutiques and vintage clothes shops of the day and were quickly adopted by the mod magpies on the street, as well as those performing on stage, with heavily striped numbers being the de -rigueur look. Among those seen wearing them were members of The Who, The Animals and The Easybeats among many others.

Those at the less wealthy younger end of the spectrum quickly adapted their school uniforms to achieve the look. In the seminal book  ‘Mods: The New Religion’ by Paul Anderson, early mods recounted their style inspiration. ‘Around this period I got a three-chrome, button blazer’ recalls Mickey Modern from London ‘it became fashionable to have your initials in Roman characters on the breast pocket.’ Lloyd Johnson from Hastings remembered that one of his friends had his mother shorten his school blazer to ‘look like a bum freezer,’ while his friend ‘took off his tie and turned his collar up.’

If anything, the look got stronger the second time around with mod revival of the late 1970s and ‘Dave’ and ‘Jimmy’ then reinforced the look in the film Quadrophenia as did The Jam who were often seen on ‘Top of the Pops’ sporting them during renditions of ‘When You’re Young’ and ‘Strange Town’ for example.

In recent years, all major mod retailers have had at one time or other had a version available, with Fred Perry, Art Gallery and Pretty Green all in the frame along with Merc and Modfather Clothing all doing tidy versions.

It would seem, the demand for the garment is still there, and long may it continue. 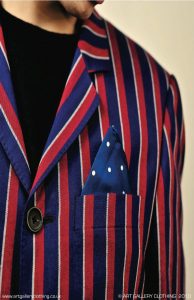