This week, I’m diverting from usual route and writing about someone deeply personal to me.

The outpouring of love all over my social media feeds and beyond, upon the announcement of the death of my dear friend Georgie Dyer, was all anyone needed to know about the man. He was simply loved by all walks of life, from every background.

George Edgerton Dyer was born in St. Elizabeth, Jamaica in 1955 and he arrived in the UK aged 4, with his mum and sister. His dad Oscar, had come over a year or so earlier, aged 19 and once here, he had picked up on his trade as a trouser maker which he had learned back home. George also gradually developed a love of clothes and by 17, he too was working for a variety of high street tailors all over London, honing his craft both in-store and at The London College of Fashion, where he studied on day release for three years.

‘All my mates were earning good money elsewhere and asking to me to go out on a Friday/Saturday night, but I was on apprentice money and needed to study. It was hard, but I stuck at it and thought long term.’

Once qualified, George began working as a bespoke tailor in Peckham for many years, for a right old character called Jimmy ‘Pie and Mash’ Nash, who taught our boy many things. Some good, some bad, but George loved him. After a few years with Jimmy, George eventually took on the lease of the old ‘Ron Martin’ shop at 187a Walworth Road in 1995. There had been previous tailors in situ there for over 80 years and George was keen to carry on the ‘art of bespoke’ at the premises, under his own shop name of ‘The Threadneedleman.’

It was a struggle at first, but gradually, his old customers found him again and then a new wave discovered him and his work. He made a multitude of styles for mods, city gents, bride grooms, teddy boys, skinheads, best men, and suits and skirts for women, from every make of cloth known to man.

No job was beyond George, he simply rose to every challenge, backing himself  all the way, with his motto – which can be found on his shop window  – ‘Nulli Secundus’- second to none.

‘One day a fella came in with his curtains, complete with the metal rings still attached at the top. He demanded I made him a jacket from the material. Well, I was skint at the time, so I cracked on. He seemed very pleased at the end.’

Then things became a bit sticky and this is really where I came in. I was a long-time customer of his and loved a handmade suit. He told me he was in danger of going under. In response, I told him about websites and maybe social media, and he put his head in his hands.

So, I did. He’d pay me in trousers for starters and gradually, by slowly embracing new technology, we found customers from all over the UK and indeed the world. People from Australia, America, all parts of Europe and even Japan, have used George and his skills.

All sorts would walk through his door. Pop stars, radio broadcasters, film stars, numerous film crews and hundreds and hundreds of normal, everyday people, who he then proceeded to treat like pop stars and film stars etc.

‘All my customers are celebrities to me’ he was known to say almost daily.

Of course, it hasn’t all been plain sailing, but even the recent global pandemic, through which he somehow kept going, couldn’t stop him trading.  In fact, recently, he had never been so busy, his reputation going all before him.

George was a very hard-working man, often grafting into the small hours of the night to finish a garment. He rarely took a day off and gradually, as he got older, all that took its toll on his general health. He soldiered on, of course, as he was in love with what he did for a living. This wasn’t work to George, this was love, this was a passion. He seemed to be always there, a permanent fixture on the Walworth Road.

So, losing him like we did on the 28th of March 2022 was a total shock to his close family and all that knew him. Wife Colline, daughter Deniece, granddaughter Isla Rose, his mum now living back in Jamaica and his three sisters, along with the wide circle of extended family and his hundreds of friends and customers, old and new.

Personally, we had got so close, that I think of him as a brother. Yes, he could drive me mad, with one crazy idea after another,  like when he said he wanted to open a museum to house all the old suits he had made over the years.

‘Be blinding that’ he said all excited.

In life as you get older, you come to realise, you don’t meet many people like George as you go about your daily life. I’ve worked out, I worked with him for 20 years out of the 27 years I knew him. I saw him nearly every week in all of those years and we spoke twice a week on the phone. He had his own language and phrases, which confused most, but if you knew, you knew. In the close knit ‘frat’ – i.e., our circle of good mates – you were always referenced as ‘my’ Markie in my case or ‘my Ed’ as in the artist Ed Gray’s case.

In the shop, where sometimes we’d do some work, we’d stand and put the world to rights for hours. We laughed like silly fuckers most of the time & occasionally we cried, as when ‘our’ Deano left us, a very sad day that. We also loved to ‘break bread’ next door. ‘My’ Robert Elms was never off George’s radio when he was on and music constantly played in the shop. It was more social club, than tailors.

I’ll leave you with this. I have met many, many people in my 60 years on this planet, but trust me, not many come as close to being as beautiful a human being as George Dyer.

I will miss him terribly.

Goodnight Georgie and thank you so much son x 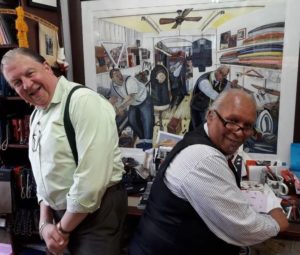 Last of the SALE items